Albarracin is in the Aragon region of Spain in the Teruel province.

Albarracin is one of Spain's most beautiful villages and if you are in the Aragon region you should definitely head in this direction. The village is set on a cliff above the Rio Guadalaviar and its medieval houses have remained virtually unchanged for centuries. The town has been listed as a National Monument since 1961 and has received an international award for the quality of its preservation.

The village winds up the cliff in steep, cobbled streets and as you climb you get to see all the tall, balconied, medieval houses. At the top of the village is the castle and the views from here over the village and the surrounding National Park and the Universale Mountains is fantastic.

The medieval defensive walls of Albarracin are much longer than the town itself and if you approach Albarracin from the town of Teruel you get an excellent view of these. Indeed the drive is a lovely one through great scenery.

The first of May is the day of a festival during which the local young men tour the city singing traditional songs and there is a night-time parade.

When wandering through the lanes look out for the houses of Casa del Chorro, Casa de la Julianeta and Casa de la Calle Azagra which are particularly well preserved and attractive.

There are a number of palaces including the Bishops palace, the Dolz del Espejo. The Bishops Palace has a Diocesan Museum attached to it with a good collection of Flemish tapestries.

The cathedral, the Cathedral of El Salvador, is medieval in origins but has been altered in the 16th and 18th centuries.

The Plaza Major is very attractive and one of the wings of the towns hall has an excellent view of the River Guadalaviar below.

The castle is closed to the public but is an impressive sight non the less.

Where to visit near to Albarracin?

The small city of Teruel with its abundance of Mudejar architecture is just 38 kilometres away.

You can find more local travel ideas in the Teruel guide and the Aragon guide.

Map of Albarracin and places to visit

Places to visit near Albarracin

Teruel cathedral is a treat and the town boasts five Mudejar towers. A must for anyone interested in Mudejar architecture. 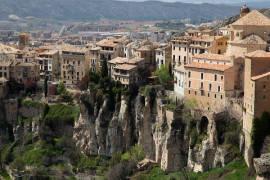 Cuenca sits dramatically on top of a gorge. Visit the hanging houses which are literally hanging over the edge.