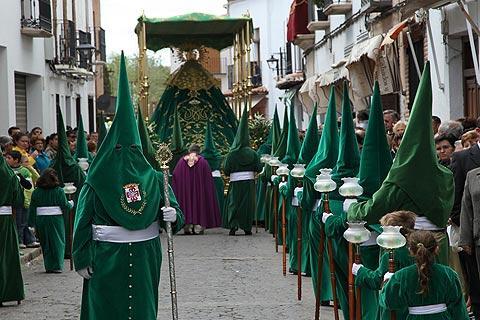 Almagro is in the province of Ciudad Real in the Castilla La Mancha region of Spain. Almagro is considered to be one of the most beautiful towns in Spain.

Almagro is a beautiful town whose heyday was in the 15 and 16th century when the Fugger family, bankers to Carlos V, lived here.  They brought a northern european influence to the town which can still be seen today.

The highlight of Almagro is its Plaza Mayor with its fine arcaded and colonnaded buildings, each with green framed windows - legacy of the Fugger family's influence. 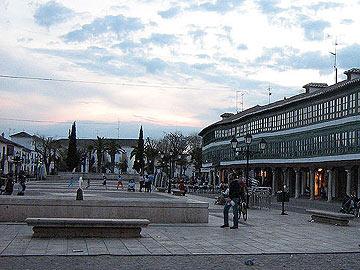 On one side of the square is the Corral de Comedias, a 16th century open air theatre  which regurlarly hosts performances of 16th and 17th Spanish theatre. It is the only theatre in Spain of this period.   In July there is a theatre festival. If you are not lucky enough to see a performance here you can still visit the theatre during the daytime. Also on the main square is the town hall and the National Theatre Museum which is housed in a typical La-Mancha house. It is home to a collection of theatre costumes, and model theatres and stages.

A walk round the town reveals many architectural treasures such as the Maestri palace, and the place of the Counts of Valparaiso. Grand houses abound such as the El Mayorazgo de los Molina, La Casa del Prior and Los Rosalie. As well as the many mansions visit the Fuggers Renaissance Warehouse and the former university.

Of religious significance in Almagro are the churches of San Austin and San Bartolome and there are various convents to see. The San Francisco convent has now been transformed into one of Spain's lovely Parador hotels. The interior has been tastefully decorated and there is a lot of beautiful latticework to admire.

Market day in Almagro is Wednesday morning. There is a classical theatre festival in Alamgro each year.

Our photo is taken during Spain's important Semana Santa festival (March/April). This is an Easter Week festival celebrated throughout Spain.

Museo del Teatro. Houses a collection of posters, photos and other items connected to the theatre.

Ciudad Real is to the west of Almagro and has a museum dedicated to Don Quijote. Cervantes' hero Don Quijote set out on a number of adventures in La Mancha and many of the places which feature in the book can be seen on the Route of Don Quixote details of which you can pick up in the tourist offices in the area.

Consuegra with its windmills and attractive Plaza Major is the La Mancha conjoured up by Cervantes.

Map of Almagro and places to visit

Places to visit near Almagro