Besalu is in the province of Girona in the Catalonia region of Spain. Besalu is a wonderful medieval town, considered to be one of the most beautiful towns in Spain.

Enter Besalu across its eleventh century fortified bridge and then walk into town where you will be enchanted by the medieval town that awaits you. Besalu is quite a small town which has had Roman, Visigoth and Moorish rulers but its modern day splendour dates mostly from the 11th to 14th centuries.

Besalu's wonderful fortified bridge is perhaps its most important monument. The bridge spans the Fluvia river and has a fortified gateway in the middle. Unusually it is not straight but follows more of an 'L' shape to take advantage of rock in the riverbed. The views of Besalu across the bridge really are superb. 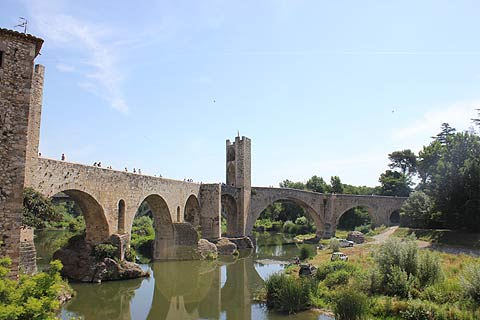 Once you have crossed the bridge into Besalu the narrow paved streets, old stone buildings and the little pottery shops selling the very colourful and very cheap Catalan pottery are a treat.

Placa Llibertat in Besalu's centre is a beautiful medieval square surrounded by buildings. The tourist office is here - housed in the delightful 13th century Casa de la Vila. Tuesday is a good day to visit as there is a lively market in the square every Tuesday.When I visited a large old plane tree at one edge of the square had been dressed in a large coulourful knitted 'sock' and hung with knitted scarves. I'm not sure why but it certainly looked delightful.

Leave the square on the Calle Tallaferro and admire the beautiful buildings, the ruins of Sant Maria are on this street.

The churches of Sant Vicene and Sant Pere are both worthy of a visit. Both are Romanesque churches. Sant Pere is all that now remains of Besalu's Benedictine monastery. The Monastery of Sant Pere is on the edge of a large square which also had a number of trees wearing knitted 'socks'.

The Sant Vincenc church is an attractive little church with a lovely flower-shaped stained glass window above the alter. It sits in an attractive square - another nice place to sit outside and have a drink or a meal. 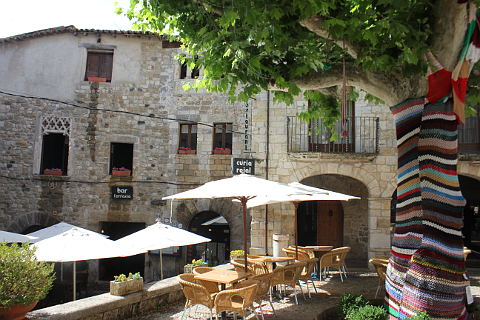 Back near the bridge is a Jewish bathhouse, a mikvah, which dates back to 1264 but was only discovered in 1964! It is one of only three surviving Mikvah's in Europe. To visit the Mikvah, ask at the tourist office. This is found in the old Jewish quarter, a quarter which is particularly rich in historic detail in Besalu.

The first weekend in September is a particularly good time to visit Besalu as it has a medieval festival with people dressed in medieval costumes, medieval re-enactments and displays of skills such as juggling and medieval music.

South of Besalu is the lake of Banyoles where the 1992 Olympic rowing races took place. It is a popular place for picnics.

The neighbouring town of La Bisbal is the centre of Catalonia's ceramics industry and an excellent place to pick up a bargain. It is also home to the Palace Castle of the Bishops of Girona.

Take a drive to Olot in the Volcanic region of Garrotxa.

The interesting walled city of Girona is not far away.

Map of Besalu and places to visit

Places to visit near Besalu 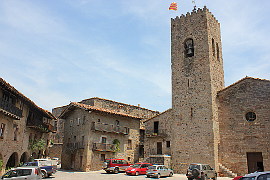 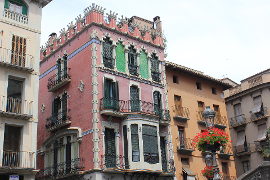 Olot is an attractive town in the Baixa Garrotxa volcanic region. The area has thirty volcanic cones. 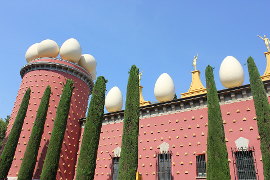 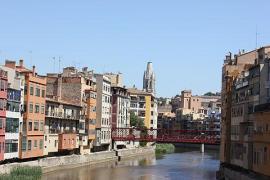 Girona is an ancient, walled city with an attractive riverside. It is a great destination for a weekend break. 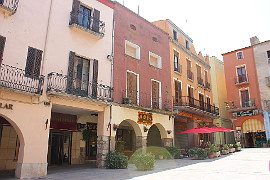 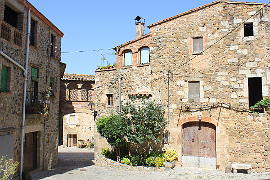