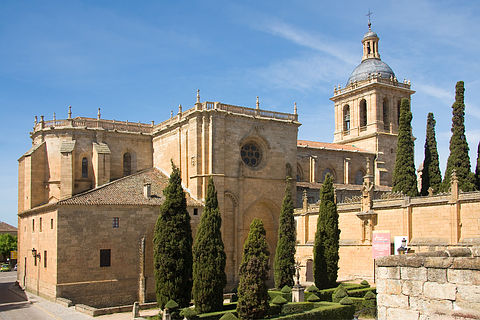 Ciudad Rodrigo is in the province of Salamanca in the Castile and Leon region of Spain. It is said to be one of the most beautiful towns in Spain. Ciudad Rodrigo is close to the border with Portugal - hence its fortifications - the fortified walls and castle. Its historic centre is a classified "Historic-Artistic Site".

Ciudad Rodrigo has splendid twelfth and seventeenth century walls, streets of Renaissance mansions, a castle which was the first historic building to be turned into a parador, and a beautiful Plaza Mayor. Its buildings are in a lovely golden stone and the town is perfect for a leisurely stroll, well worth the detour from Salamanca.

The historic centre is surrounded by a medieval wall which is 2 km long and has seven gateways. This was constructed in the 12th century though extensively altered in the 18th centre. The oldest gates are the Puerta de Santiago and the Puerta del Sol. Another gate, the Puerta de la Colada leads to the Castle of Henry II which was built in the 14th century.

The castle of Henry II of Trastamara is now a parador and has views across to Portugal. It also looks down onto the river Agueda and a Roman bridge crossing the river.

Ciudad Rodrigo's main sight is its cathedral with its attractive balustrade and cloister and choir stalls carved by Rodrigo Aleman. Have a close look at these to see the rather grotesque figures. The cathedral has a mixture of Gothic, Romanesque and Plateresque elements.

The Plaza Mayor is very attractive and is an excellent spot to stop at a bar or restaurant. Take a look at the 16th century  town hall with its two towers and lovely arcaded upper floor. The House of the first Marquis of Cerrablo and the 16th century Casa de los Cueto are also on the lovely main square.

Ciudad Rodrigo sits at the foot of the Sierra de Gata mountains which offer some lovely scenery to explore.

Don't miss a visit to the beautiful city of Salamanca. This is one of our favourite Spanish towns and well worth a visit when in the area or as a 'city-break'.

The village of La Alberca, one of the most beautiful villages in Spain is nearby. It has now become a national monument.

Map of Ciudad Rodrigo and places to visit

Places to visit near Ciudad Rodrigo 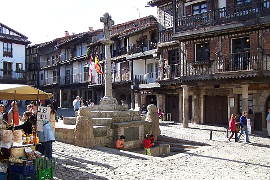 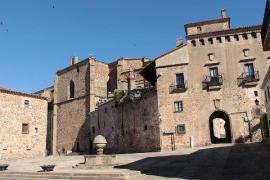 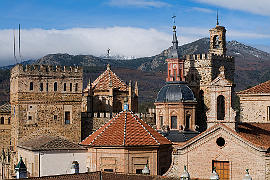