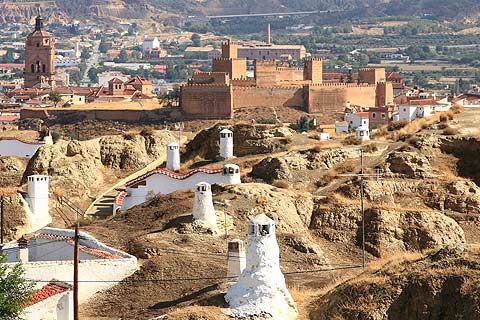 Guadix is in the province of Granada in the region of  Andalucia. It is about 60km from Granada.

Guadix is a fascinating town where almost half its inhabitants live underground in a huge troglodyte district. Fascinating to see the landscape as the area is one of craggy cliffs in a reddish colour and standing out from this landscape are the whitewashed chimneys of the troglodyte dwellings. Often you can see the front wall and doorway of the dwellings painted white but the rest of the dwellings extend back underground into the hillside.

About 10,000 people are housed in these dwellings which have been inhabited for centuries. To find the area follow the signs to "Barrio Troglodyte". Inside the troglodyte dwellings many have all the features of regular homes with fitted kitchens and internet connections. The residents have taken up home in the caves as an excellent insulation from the very high temperatures during summer in Andalusia.

Visit the Cueva Museo opposite the church of San Miguel and you can get an idea of life in a troglodyte house.

As well as its cave dwelling area Gaudix is a bustling city with a cathedral and streets of 'normal' buildings. Also to see in Guadix are the cathedral built in the 16th century in local red sandstone and the Moorish Alcazaba dating from the 9th century and now in ruins. Climb its towers for great views of the surrounding countryside including the snow-capped peaks of the Sierra Nevada mountains. Nearby is the Mudejar style church of Iglesia de Santiago has a particularly fine ceiling.

Guadix has an arcaded Renaissance square which has been extensively renovated following damage during the Civil War.

Also in the centre is the Cave Museum which has displays about the history of the cave dwellings in the area.

No visit to this part of Spain would be complete without a trip to the Alhambra Palace and Generalife in Granada. One for your bucket list!

Guadix sits in three national parks and so you can enjoy some very pleasant and interesting scenery whilst in the area. The Sierrra Navada National Park, the Natural Parks of Sierra de Baza and Sierra de Huector all offer wonderful scenery.

The Castle of the Calahorra in La Calahorra is well worth a visit. It has a beautiful Renaissance courtyard full of arches built out of Italian marble. The main building is built in Moorish style.

Map of Guadix and places to visit

Places to visit near Guadix 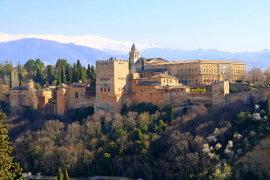 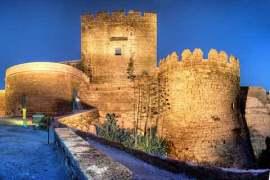 Almeria is home to the largest fortress built in Spain by the Moors, the Alcazaba. 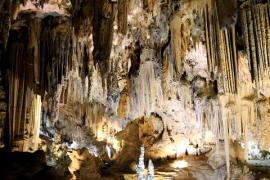