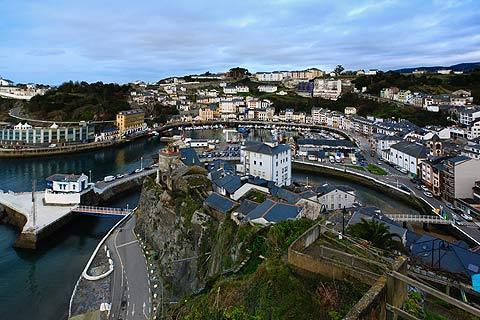 Luarca is in the province of Asturias in the Asturias and Cantabria region of Spain. 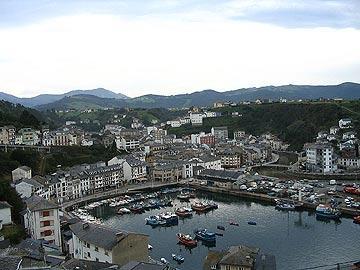 Luarca has a really superb harbour. Circled by tall buildings typical of the Asturian architecture it has a nice sheltered position and the water is dotted by small fishing craft. Take a walk along the jetty and look back to get excellent views of the harbour.

Lovely by daytime it is even better at night when it is lit up by the street lights and surrounding buildings. Luarca's harbour is a great place to stop for a drink or a meal.

Luarca has a beach backed by tall cliffs. Part of it is very sheltered and an excellent spot for a bit of sunbathing.

The town itself not only has the sea at the front but has a river, the river Negro, winding through it and so is criss-crossed by seven bridges.

Up above the town there is an attractive multi-tiered cemetery, said to be one of the most attractive in Spain. It sits on a rocky outcrop and from here with the sea behind you you can see Luarca and its harbour down to the left and an attractive beach, backed by cliffs, to the right. There is also a hermitage chapel and a lighthouse.

Luarca is on the northern route of the Camino de Santiago Compostella - the popular pilgrimage to Santiago de Compostella in Galicia. This is also known as the 'Way of Saint James'. It was one of the most popular pilgrimages in Medieval times and is hugely popular nowadays too with tens of thousands of pilgrims following the route every year.

The Aula del Mar near the lighthouse is a marine zoology museum with a large collection of giant squid.

Cudillero is also on this part of the Costa Verde coast and is considered to be one of the most beautiful villages of Spain.

Further west of Luarca is the pleasant port of Navia

Map of Luarca and places to visit

Places to visit near Luarca 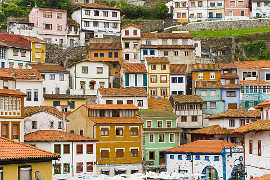 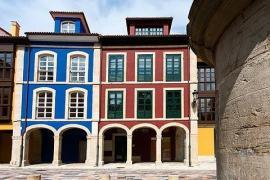 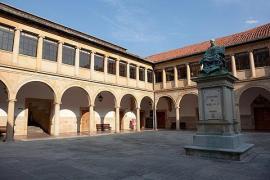 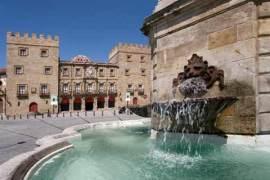