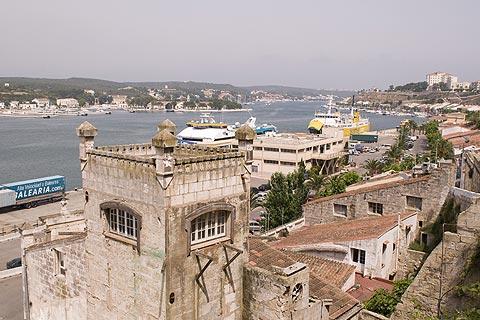 Mao is the capital of the island of Menorca in the Balearic Islands. It lies on the south-east of the island.

Mao was occupied three times in its history by the British and their influence can be seen in the Georgian town houses in the town.

Mao is a quietly elegant town whose streets rise up steeply from the harbour. Stone steps lead up from the ferry terminal to four squares. There is the Placa Espanya, home to a great fish market and offering great views of the bay. Placa Carma has an 18th century church whose white cloisters are now a fruit and veg market.

Placa Constitucio is home to Mao's main church the Santa Maria which has a huge wooden organ with 3000 organ pipes. Next to the Santa Maria is the Town Hall whose facade contains a clock given to the island by the first British governor of Menorca. The Place de la Conquesta has an 18th century mansion, the Casa de Cultura which houses the library.

Not far away is the church of Sant Francesc with its Baroque facade and lovely Chapel of the Immaculate Conception.  It is also home to the Museum of Menorca with prehistoric and other artefacts.

There are many mansions in Mao, a particularly noteworthy one being the mansion Sant Antoni also known as the Golden Farm. This is found on the north side of the harbour and is an example of Palladian architecture. It has an arched facade and in local style the walls are painted red and the arches white. Admiral Nelson is said to have stayed here during a visit to Menorca.

Make sure you walk down Casa Isabel II which is the most elegant of all Mao's streets and packed with mansions many of which have a distinctly British feel to them  - particularly their bow windows.

The oldest building in Mahon is the Arch de San Roque which is all that remains of the defensive walls that once circled the town.

The Port of Mao has a nice relaxed atmosphere though during the evening it becomes the place to head for to enjoy the harbour-front bars and restaurants.

This southern part of Menorca is beautiful. Great beaches, great countryside and some charming villages and towns. The main beach resort on this part of Minorca is Punta Prima.

Cala-en-Porter is a popular resort nearby and is close to a couple of interesting cave formations.

Map of Mao and places to visit

Places to visit near Mao 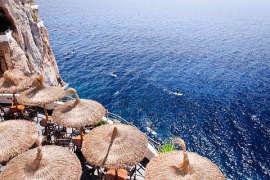 Cala-en-Porter is a resort on the island of Menorca. It sits on a pretty bay with a steep cliff on one side. 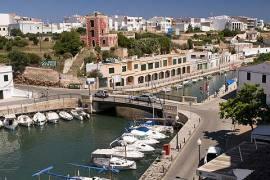 Ciutadella is an atmospheric town with cobbled streets and a fabulous main square.