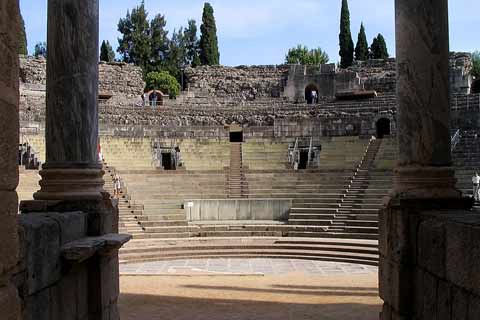 Merida is the capital of the province of Merida in the Extremadura region of Spain.

Merida was once the largest Roman town in Iberia. There are an amazing number of Roman sights to be seen, indeed, more than anywhere else in Spain. The archealogical ensemble in Merida is a UNESCO World Heritage site.

The main sight in Merida is the Roman theatre and ampitheatre. The theatre is one of the best preserved Roman theatres in the world and it is still used today. The Festival of Merida is a popular summer festival and some of its plays are staged in the Roman theatre. The theatre was built in 15BC. The ampitheatre was built later. The Roman Theatre of Merida was voted one of the top twelve 'Treasures of Spain' in a national TV and radio competition in 2007.

Near the theatre are the remains of a Roman house, the Casa del Anfiteatro which has some large mosaics in very good condition.

Merida's excellent Roman museum, the Museo Nacional de Arte Romano, is also here. The museum was designed by Rafaeil Moneo, one of Spain's foremost architects, and houses a magnificent collection of mosaics, sculpture, ceramics and other Roman artefacts.

The Puente Romano, the Roman bridge, spanning the Rio Guadiana is magnificent. It has sixty arches and is the longest bridge of its age. It is still in use as a footbridge and from it you get good views of the new bridge the Puente de Lusitania, designed by Santiago Calatrava.

Next to the bridge is the Alcazaba built to protect the bridge. This was built by the Moors and is one of Spain's oldest Moorish buildings.

In the centre of the town there is a Roman temple, the Templo de Diana, this has been incorporated into a 17th Century mansion.

If you are planning on visiting a few of the Roman sites it is cheaper to buy a combined ticket than to buy each one individually. The combined tickets can be bought at each of the sites.

If you want to conduct your trip in a little luxury then book into the Parador of Merida which is housed in an 18th century Convent.

As well as the excellent Roman museum mentioned above there is a museum of Visigothic Art in the Convent of Santa Clara in the main square.

Caceres is considered to be one of Spain's most beautiful cities and is well worth a visit. The Plaza Alta in Badajoz is surrounded by buildings with lovely brick patterns decorating them.

You can find more local travel ideas in the Badajoz guide and the Extremadura guide.

Map of Merida and places to visit

Places to visit near Merida 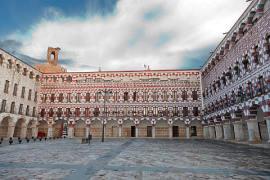 Badajoz has a lovely mix of Spanish and Moorish buildings. Plaza Alta with its brick-patterned buildings is a highlight. 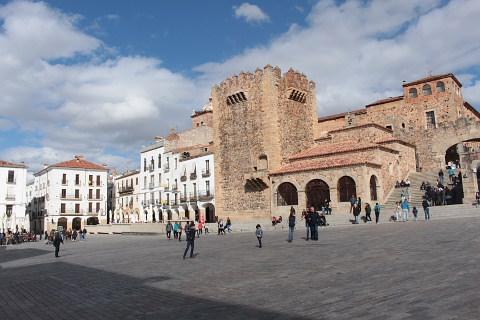 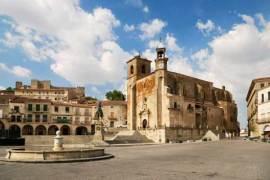