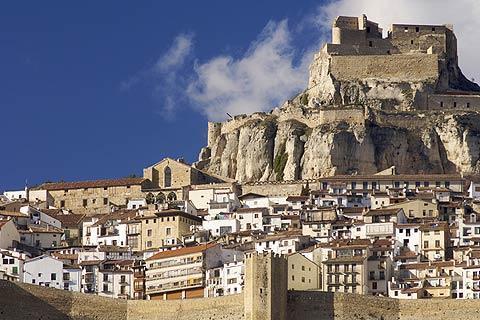 Morella is in the province of Castellon in the Valencia and Murcia region of Spain.

Morella is an extremely attractive town, sat dramatically on top of a rocky outcrop and dominated by a ruined castle. It is considered to be one of the most beautiful towns in Spain.

Morella is dominated by a medieval castle. Below the castle, surrounding the old town, its medieval walls form an unbroken circle and are extremely well preserved.

Morella was liberated from the Moors by Jaime I in the 13th century. He is said to have been so taken by the town that he was very reluctant to hand it over to the crown causing much displeasure on the part of the king! 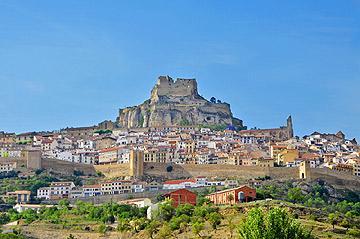 The old town can be entered through the huge stone Sant Miguel gates and inside iIt is lovely just strolling round the narrow streets and steep alleys of Morella. Many of the houses have the traditional hanging balconies. The main street, Blasco de Alagon has arcades supported by stone pillars and is pedestrianised.

Throughout the town are examples of Gothic and Romanesque style architecture. The road winds up towards the castle and as you reach the castle at the top the views over the surrounding countryside are stunning.The castle is in ruins but is well worth a visit.

The other main sight in Morella is the church of Santa Maria the Major which has a unique raised choirloft and a lovely marble spiral stairway leading to it.  Nearby is the Monastery of San Francisco with a fine Gothic cloister and views to the castle on the hill above.

Look out for the Calle de la Virgen for the house, marked by a plaque, where apparently St Vincent performed a miracle. He visited a house and its owner was so distraught at not being able to offer him a meal containing meat and so cut up her son, put him in a stew and served him up to the saint. When the saint found out he managed to put him back together and bring him back to life!

The Museo Tiempo de los Dinosaurios near the monastery houses a collection of dinosaur fossils found in the local area.

Where to visit near to Morella?

Nearby Alcaniz is also home to a castle and this one has been turned into a lovely parador hotel. Peniscola is a fortified town on the sea and worth visiting.

Map of Morella and places to visit

Places to visit near Morella 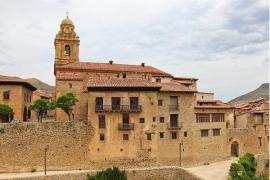 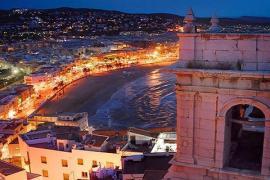 A fortified, medieval town surrounded on three sides by the sea. With alleys and white houses the town has lots to explore.