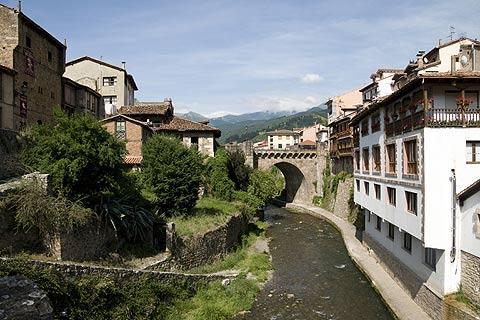 Potes is in the province of Cantabria in the Asturias and Cantabria region of Spain. Potes is a small town in the heart of the Picos de Europa and is considered to be one of the prettiest villages of Cantabria.

Spain This Way comment: Potes is a charming town in an idyllic setting. If you are a keen walker or mountain biker it is definitely worth staying a few days.

Potes sits in a lovely setting at the confluence of four valleys in the Picos de Europa and so surrounding the village are the hills and mountains of the Picos de Europa. Because of its strategic position it grew in power and influence and by the 13th century was considered to be a city and had Royal recognition.

Nowadays Potes is an attractive small town whose major industry is tourism. Potes has a charming medieval centre with a maze of narrow alleys and ancient streets to explore. The houses are built in a mellow golden stone and a river runs through the town with a number of attractive small stone bridges crossing it. . 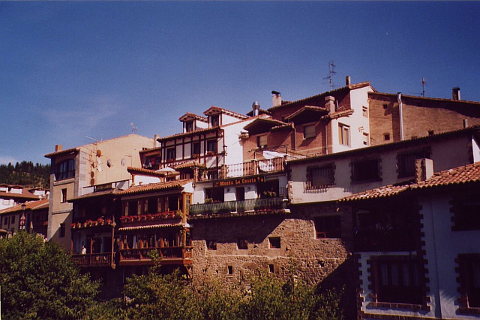 Whilst in the town take a look at the 13th century Torre del Infantado in the main square. It is four storeys high and has a crenellated roof and a balcony half way up in front of a clock. This is now the town hall. There is an exhibition in the tower with some beautiful illuminated manuscripts of the Book of Revelation. It is also worth the small entrance fee for the views from the top of the tower.

The old Gothic church of San Vincente is now home to the tourist information centre and the new San Vincente church was built in the 19th century. Inside is a Baroque altarpiece which originally belonged to the Convent of San Raimundo.

Many of the Potes villagers emigrated to America and when they returned they brought with them wealth from the New World and led to various notable buildings being built. These large houses include the 18th century Casona de la Canal, the 17th century Torre de la Familia Osorio and the Torre de Orejon de la Lama which is used for exhibitions and events.

There are a number of bridges criss-crossing the river that runs through the town. The San Cayetano bridge and the La Cercel bridge are the most notable.

Many of Potes' visitors are here on walking or mountain bike holidays and Potes is a good town for accommodation and stocking up on provisions. It is also possible to arrange a number of ourdoor activities in the town. The trail between Potes and Fuente De is very nice and at Fuente De you can do a trip in the funicular to the top of the mountain.

Potes lies in the Valley of Liebana which is planted with grapes, cherries and walnuts. The town makes its own spirit called Orujo which you must try when you visit. There is a traditional market on Mondays when you can buy Orujo and other local products. 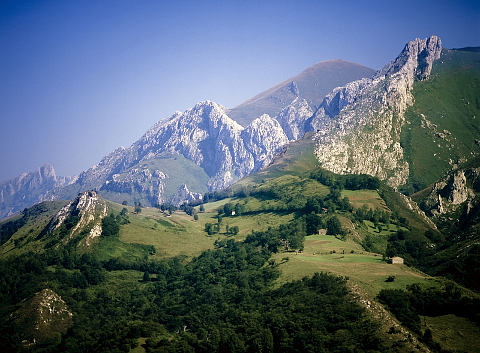 Where to visit near Potes?

6km south of Potes in the Gorge of Desfiladero de la Hermida is the church of Santa Maria de Lebena. This is a Romanesque church and has some great sculptures on the exterior.

To the west is the monastery church of Santo Toribio de Liebana which claims to have the largest fragment of Christ's cross held in a silver reliquary. In the 8th century one of its monks, Beatus of Liebana wrote the Commentary of the Apocalypse, one of Spain's most treasured medieval manuscripts.

Walk to Fuente De and take the funicular to the top of the mountain.

Visit Pido for some local cheese-makers.

Mogrovejo is another beautiful mountain village and if you are looking to hit the beach then head for Llanes which has a beautiful sandy beach backed by mountains.

Map of Potes and places to visit

Places to visit near Potes 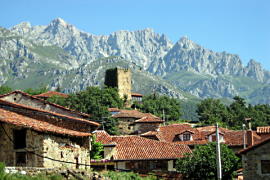 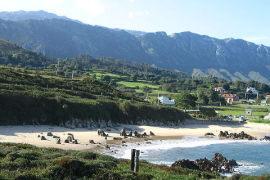 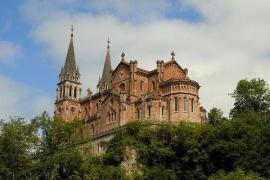 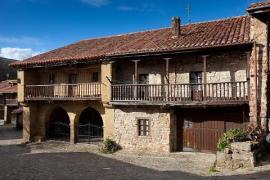 Barcena Mayor is a picturesque village with lots of the typically balconied houses of the region. Situated in the Cabuerniga Valley. 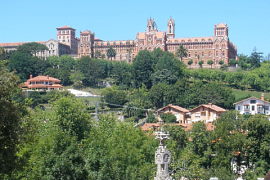 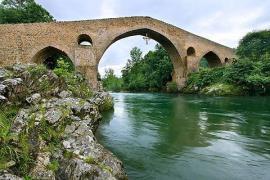