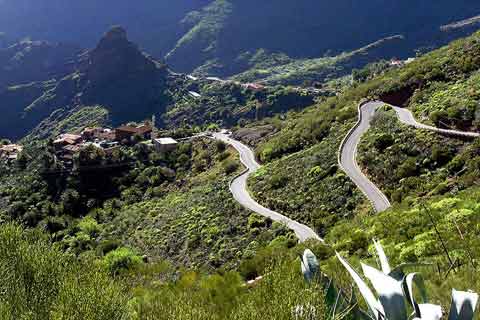 With their winter sunshine, beaches, diverse scenery, volcanic landscapes and charming colonial towns there is no wonder the Canary Islands are one of the top holiday destinations in the world.

The Canary Islands are made up of seven islands. Each one is the tip of hundreds of volcanoes which erupted from the sea millions of years ago and created the dramatic scenery that these islands are famous for.

Below is an overwiew of the Western and Eastern Islands to help you pick the best Canary Islands destination for you.

The Western Islands are made up of Tenerife, La Palma, El Hierro and La Gomera.

Tenerife is the largest and most popular of the Western Islands and has a number of beach resorts and some elegant towns.  If you are travelling with children it also has a couple of excellent water parks. Visits inland to explore Mount Teide, a dormant volcano are also popular.

La Palma is the worlds steepest island and worth visiting because of the lush vegetation and massive volcano crater, La Caldera de Tabureient. This area is a national park and is truly beautiful.

El Hierro is a small, hilly island perfect if you like a quiet holiday surrounded by nature and La Gomera has beautiful scenery with terraced hills interspersed with steep ravines. It is a favourite for walking holidays.

La Palma, El Hierro and La Gomera are all tiny islands without much tourist activity but they are being discovered by people who like walking, mountains and being away from it all.

The Eastern Islands of Gran Canaria, Guerteventura and Lanzarote each have spectacular and very different scenery.

Gran Canaria is the most popular of all the Canary Islands and has a diverse range of stunning scenery including volcanos, sand dunes and mountains. It has many popular beach resorts.

Lanzarote is the island to visit if you like volcanos. It has around three hundred of them making its scenery particularly fascinating and unusual.

Fuerteventura has good beaches and a quieter pace than Gran Canaria and Lanzarote.

Places to Visit: Towns and Villages

La Orotova - an attractive town with large sunny squares and some pretty churches.

Montes de Anaga - the mountains of Anaga are popular with hikers.

Teide National Park - Mount Tiede is at the centre of the park surrounded by a moon-like volcanic scenery. You can visit the crater by foot or by cable-car. On the edge of the crater is the Parador de Canadas del Teide

La Restinga - a popular resort especially with scuba divers because of the 'Sea of Calm' - the calm waters that surround the south-western part of El Hierro.

Haria - a pretty village surrounded by palm trees and  with views of Monte Corona.

Puerto del Carmen - the most popular resort on Lanzarote.

Maspalomas - a fabulous desert-like area of sand dunes with beaches and resorts and also with a protected area which you can cross by camel!

Playa del Ingles - the liveliest resort on the island, next to the Maspalomas dunes.

Betancuia - a pretty village built on the edge of a volcano.

Corralejo - a seaside resort built up from a fishing village. It has lots of sand dunes.

Map of Canary Islands and places to visit