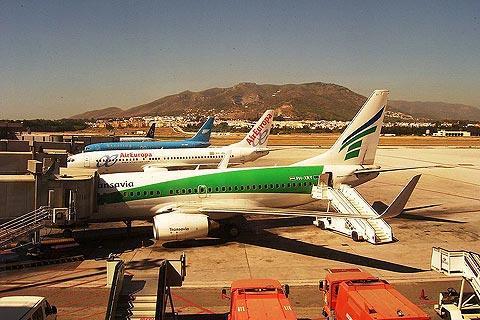 Malaga Airport, Spain is located about 8km south-west of Malaga and is the main airport for travellers to Spain's Costa del Sol. Malaga Airport is the fourth busiest airport in Spain and has about 13 million passengers a year.

There are two terminals at the airport and plans to build another. The airport has recently received large investments and been subject to extensive renovation work and is a modern airport with fairly good facilities including bars, restaurants, shops and cash machines. There is a children's play area as well as plenty of seating areas, however there is no left-luggage facility.

Airplanes fly to and from Malaga Airport from more than 60 destinations worldwide.

Hiring a car at Malaga Airport is very easy. Most of the car hire desks are on the lower ground floor of the terminal. There are around 20 companies in all. Its best to book in advance as this is a very busy terminal. See our price comparison engine to find cheap car hire.

Malaga has a new car park with room for 2,500 cars. There are three older car parks with 3000 spaces between them. Payment for the car park is by machines in the airport terminal. Parking costs around 15-20 Euros a day. The third car park (P3) is free. It takes 600 cars and as it is further away there is a shuttle bus. Add a bit of extra time if you plan to use this park and be warned there is no security at this car park and some problems have been experienced.

Trains do not go to Marbella but go to Malaga city and Fuengirola. Train fares are cheap and the service is very frequent. The train station is just over the road from the airport.

Taxis are also available but in the summer queues can be long. Complaints of overcharging are frequent. The Malaga Airport Taxis unfortunately do not have a meter but the driver should have a book with him which show all the fares. Demand to see it. If in doubt go to the next taxi in the line. If at the end of the journey the driver tries to increase the fare threaten to call the police.