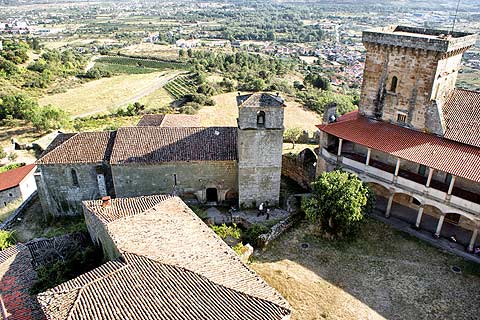 Verin is the in the province of Ourense in the Galicia region of Spain.

The main reason to visit Verin is the Castillo de Monterrei which is about 4km to the west of Verin. The castle sits high on a hill above Verin and a sea of vineyards. Monterrey castle, as it is known in English, was built during the war with Portugal in the 12th century. It has three rings of defensive walls and a 15th century keep. There is also a 13th century church and an attractive courtyard.

The castle is lit up on a night and can be seen from miles around - even from Portugal across the border.

The castle is a short walk up from the parking area and offers some great views over the surrounding countryside.

Next to the castle is a parador.The parador is in a large country house of typical Galician style and has lovely views of Monterrey castle and the surrounding vineyards.

Verin itself is known both for its wine and its bottled water. The centre has some interesting 17th century houses with glassed in balconies common to parts of Spain.

The carnival in Verin is a particularly good one with lots of the town dressing up in elaborate masks and costumes with cow bells tied to their waists. These grinning figures are known as Cigarrons. The carnival takes place Feb/March.

You can find more local travel ideas in the Galicia guide.

Map of Verin and places to visit