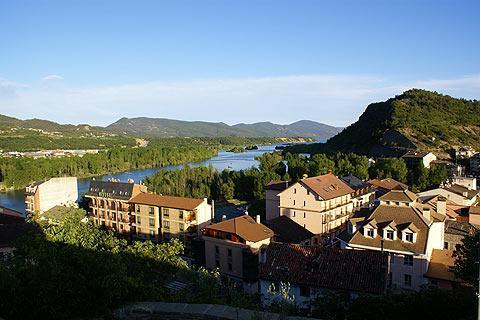 Ainsa is in the province of Huesca in the Aragon region of Spain.

Ainsa is considered to be one of the most beautiful towns in Spain.

Ainsa was once the capital of the kingdom of Sobrarbe and the birthplace of the Kingdom of Aragon. It occupies an idyllic position with a backdrop of the Pyrennes Mountains and it is on the edge of the Ordesa National Park. It's a perfect spot for walking in the summer and for winter sports.

Ainsa's historic centre is the lovely cobbled square, The Plaza Mayor which is surrounded by medieval arcaded buildings. The belfry tower of the 12th century Romanesque Iglesia de Santa Maria adds to the charm of this lovely square. You can climb the belfry to get views over the village and its primitive crypt is worth a visit too.

The Palace of the former kings of Aragon is also on the main square. Ainsa's centre was declared a National and Historic Monument in 1965.

Look out as well for the Casa Bielsa and Casa Arnal built in the 16th century, a time of great prosperity for Ainsa.

Ainsa also has a castle which dates back to the 11th century and the castle and its tower, the Tower of Tenente, are currently being restored.

The historic centre of Ainsa was largely abandoned in the 19th and 20th century and the town moved to the lower area around the base of the hill. This is part of the reason why the medieval village at the top of the hill is so unspoilt.

Ainsa has a Museum of Traditional Trades and Arts and the Ainsa Castle Eco Museum. This is housed in the Tower of Tenente.

This area is very popular with walkers many of whom stay at the nearby village of Torla.

The visitors centre for treks in the Ordesa Park and around the Ordesa Canyon is near to Puente de los Navarros. Here you can get maps and locations of the 'refugios' where you will need to stay if you are trekking over several days. Camping is not allowed in the park.

Nearby Alquezar has some impressive mudejar architecture to visit.

You can find more local travel ideas in the Aragon guide.

Map of Ainsa and places to visit

Places to visit near Ainsa 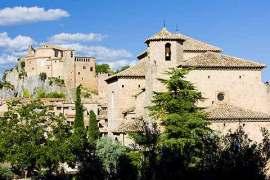 Alquezar is situated above the Rio Vero canyon the combination of great views and moorish architecture makes this village well worth a visit.